Over the past seven days, Dunblane BB Boy, Liam McGregor, and his dad, Willie, have been cycling almost the length of Scotland to celebrate 130 years of the Boys’ Brigade. 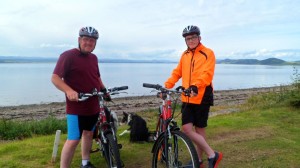 After a week at our BB Summer Camp under canvas at Brodie Castle, near Forres, father and son drove up to Caithness with mum, Alison and sister, Chloe, as the support team and began their BB-themed journey at Pennyland House in Thurso, the house where Boys’ Brigade founder, William Alexander Smith, was born on 27th October 1854. The next week would see them cycle parallel to the A9 all the way to Glasgow, where they completed their 353-mile journey at Woodside Mission Hall, where that same William Smith went on to found the world’s oldest and best youth organisation, The Boys’ Brigade, on 4th October 1883.

Connecting the two most significant buildings in the Boys’ Brigade’s history on the journey was deliberate and one of the final major events to mark the BB’s 130th Session during the 2013-14 ‘year’. As well as paying their respects to the man who started the whole thing off, Liam and Willie have been raising funds for Dunblane Boys’ Brigade and hope to reach their target of £1,000. Donations can be made online at their page and your support would be very welcome.

Throughout the session, a number of events have been held by Dunblane BB, notably a hike and barbecue up Dumyat on an unseasonably warm September 2013 day to mark the anniversary, a special church service on the 4th October itself, participation of two officers and a boy in the Great Scottish Run and many more events coordinated by Boys’ Brigade HQ and individual companies around Scotland and beyond.

Advent Appeal – ‘Be a King this Christmas – Pass the Present...
Scroll to top

This site uses cookies. By continuing to browse the site, you are agreeing to our use of cookies.

We may request cookies to be set on your device. We use cookies to let us know when you visit our websites, how you interact with us, to enrich your user experience, and to customize your relationship with our website.

Click on the different category headings to find out more. You can also change some of your preferences. Note that blocking some types of cookies may impact your experience on our websites and the services we are able to offer.

These cookies are strictly necessary to provide you with services available through our website and to use some of its features.

Because these cookies are strictly necessary to deliver the website, you cannot refuse them without impacting how our site functions. You can block or delete them by changing your browser settings and force blocking all cookies on this website.

These cookies collect information that is used either in aggregate form to help us understand how our website is being used or how effective our marketing campaigns are, or to help us customize our website and application for you in order to enhance your experience.

If you do not want that we track your visist to our site you can disable tracking in your browser here:

We also use different external services like Google Webfonts, Google Maps and external Video providers. Since these providers may collect personal data like your IP address we allow you to block them here. Please be aware that this might heavily reduce the functionality and appearance of our site. Changes will take effect once you reload the page.